The Bombay Municipal (Extension of Limits) Act came into force on 15 April 1950. It extended the boundary of Bombay Island city to include areas as far as Jogeshwari and Bhandup. These areas previously constituted Bombay's suburbs and were governed by Borough Municipalities, Notified Area Committees and Village Panchayats, which were dissolved and brought under the Municipal Corporation of Bombay. In a dissenting opinion against this Act, Chunilal Barfivala wrote that it amounted to the "wholesale annexation of vast areas, the abolition of suburban civic units and ruthlessly sacrificing the corporate life of the annexed communities." Moreover, the scheme was designed to "remove all undesirable things to the outskirts of the city," including manufacturing candles, casting metals, making cow dung cakes, soap making, tar melting, cattle stables, slaughter houses, blood boiling, bone crushing.

The reasons for extending the boundary included the decongestion of Bombay, better administration, extending civic services to the suburbs in exchange for city taxes and crime management. All of these grounds still resonate in present times.

To mark this occasion, an open discussion and mini-exhibition of maps and documents were held at R and R and covered numerous topics: the city from a suburban perspective; the Tadipaar discourse of crime as part of urban expansion; maps pre and post limit extension; the division of Majas Village; the contemporary example of villages in Vasai-Virar where a similar extension was recently opposed; and other shared observations aimed at exploring the limits of extension and the extensions of limits. 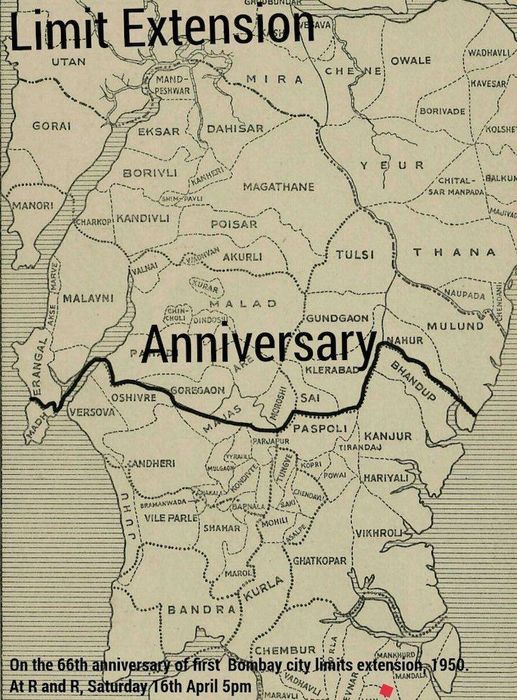