The work of the Beijing collaborative, involving Ju Anqi, Iris Long, Xu Peili and Li Zhenhua, led to a film by Ju Anqi.

For Draft, film director Ju Anqi produced a narrative film. Drill Man is about a man who wields an electric drill while roaming aimlessly. The anonymous man repeatedly uses the electric tool to bore holes in various objects that he finds along the way: a train, a cargo ship, a bus, a car, the Great Wall, a tree trunk, a flower and even a toilet seat in a five-star hotel room… His behaviour borders on threatening and destructive action, with the drill doubtless carrying sexual and offensive connotations. However, this absurd scenario also contains a strong poetic dimension. Ju Anqi’s Drill Man creates holes in the world. He leaves behind traces of his existence and provides an existential metaphor of contemporary Chinese society.

In line with Anqi’s signature shooting style, the film combines improvised and scripted dialogue. Before the film was shot in February 2016, a workshop was held with over thirty participants, including Michael Bodenmann, Jiajia Zhang, Barbara Signer and Junelin Yang.

Ju Anqi is an artist and filmmaker based in Beijing, China. Ju is a graduate of the Beijing Film Academy. His films have been exhibited in the Centre Pompidou, Paris and MoMA, New York City. His recent film Poet on a Business Trip (2014) premiered at the 44th edition of the International Film Festival Rotterdam 2015 where it won the Netpac Award. He directed the documentary There’s a Strong Wind In Beijing (2000), a documentary film reflecting the social and cultural anxieties within contemporary China. A strong advocate of reforms in Chinese media laws, in 2004, Ju along with six other independent filmmakers—including Jia Zhangke and Lou Ye—submitted a statement to the China Film Bureau identifying Bureau laws in need of urgent reform. He has participated in the Berlinale (2000) in Berlin and in numerous other film festivals across North America, Australia and Asia.  His film Quilts had its world premiere at the 2003 International Documentary Film Festival Amsterdam (IDFA). www.poetonabusinesstrip.com

Li Zhenhua is a curator, multi-media artist and producer based in Beijing, China, and Zurich, Switzerland. He is founder and director of Beijing Art Lab, a virtual and physical platform for art, research, and exchange. He managed the first international new media art festival MAAP at the Beijing Millennium Museum (2002), followed by ‘onedotzero’ at the Beijing Today Art Museum (2002). He contributed to the exhibition ‘Communicate: British Independent Graphic Design since the Sixties’, (2004-2005) Barbican Centre, London, the exhibition toured four major Chinese cities. Since 2010, he has been nominator for the Summer Academy at the Zentrum Paul Klee Bern, Switzerland, as well as for The Prix Pictet, Switzerland. He was a member of the international advisory board for the exhibition ‘Digital Revolution’, Barbican Centre, London (2014). Li Zhenhua has edited several artists' publications, including Yan Lei: What I Like to Do (2012) and Yang Fudong: Dawn Mist, Separation Faith (2009). A collection of his art reviews has been published under the title Text in 2013. www.bjartlab.com and www.msgproduction.com 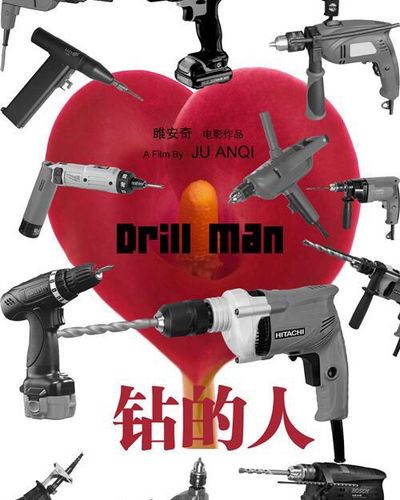 The DVD compilation contains Ju Anqi’s film Drill Man (2016), which was produced within the framework of Draft. The edition also includes his film There’s a Strong Wind in Beijing (1999), as well as a trailer for A Missing Policeman (2016) and interviews about the making of A Missing Policeman. In the accompanying booklet, Zhang Yaxuan's essay Freedom is Indivisible discusses Ju Anqi’s works.

© 2019 Ju Anqi
This DVD is intended solely for the purposes of researching and studying the artistic work of Ju Anqi. It may be used exclusively for private and educational purposes.