BEYOND WELCOME: ANOTHER PLANNING IS POSSIBLE

The project Beyond Welcome aimed to understand the so-called refugee crisis as a crisis of urban living/housing. Departing from performative, interventionist, and activist practices, a parade was organised together with different political and cultural authors in response to the ongoing discussions on abandoned properties and new housing blocks for refugees. The project sought to discuss the role of the artist in the creation of new urban landscapes by understanding Hamburg as an arrival city.

Does Hamburg have a “refugee problem”? No, Hamburg has a housing problem. For decades, real estate developers and politicians have been treating cities like Hamburg as if mainly high earners lived there, as if low-income people and the homeless had no right to the city and as if worldwide forced migration couldn’t reach Europe.

Between 2015 and 2016, the arrival of more than one million refugees from regions ridden by war, poverty and terror has revealed that this kind of city planning is irresponsible. All of a sudden, it’s obvious that a policy that habitually fears “ghettoisation” when it comes to social housing will fail to cope with the historic challenges of our time. The neoliberal city has been unable to develop good, affordable and sustainalbe housing. Instead, it has turned social housing into a subsidy-scheme for investors – and all this is now taking its toll.

In response to this situation, a choreographed parade, rounded off with a public hearing bearing the motto “Other planning is possible,” took place on 28 May 2016.

Sophie Goltz is the artistic director of Stadtkuratorin Hamburg (curator for public art of the city of Hamburg) since 2014; a newly created position aiming to give fresh impetus to the project ‘Kunst im öffentlichen Raum/Art in Public Space’ that has existed since 1981. She has worked as a curator for Neuer Berliner Kunstverein (n.b.k.) from 2008-2013. Goltz also lectures at the Hochschule für bildende Künste Hamburg and writes regularly for magazines such as Texte zur Kunst, springerin and Art Agenda. Previously, she has worked as a freelance curator and art educator with Documenta 11, Kassel (2002), the 3rd Berlin Biennale (2004), ‘Projekt Migration’, Cologne (2004-06) and Documenta 12, Kassel, (2007). www.stadtkuratorin-hamburg.de

Alice Peragine is an artist living and working in Hamburg, Germany. Utilising performative installations and site-specific interventions her work examines social, visual and institutional structures. Space, body, and image are crucial parameters in her performances and video installations. Questions concerning the relationship between the audience and the work, the beginning and end of a performance and structural power relations within institutional ensembles are central to her approach. After completing a Bachelor of Fine Arts and Art History at the University of Greifswald, she moved on to study Fine Arts at HFBK Hamburg with Michaela Meliàn in the department of Time Based Media in 2010. Currently she is involved in several collaborative projects in Hamburg such as PLATEAU, a web based publication for the performing arts that aims to create more visibility for experimental approaches to performance and social practices in urban spaces by providing a platform for interdisciplinary discourse through the production of texts. www.plateauhamburg.de

Christoph Schäfer is an artist working on urban everyday life and the production of spaces for collective desires since early 1990. This interest is reflected in a wide range of works, which often reflect and sometimes intervene. Schäfer is decisively involved in Park Fiction, a community driven public space in Hamburg. As a member of Park Fiction, Schäfer is interested in the exchange between different subjectivities and the collective redefinition of a public space. With Park Fiction Schäfer was part of Documenta 11, Kassel (2002). Schäfer is a founder and part of the team of PlanBude that currently organises the participation in the planning process for the new Esso houses in St. Pauli, Hamburg. He has authored The City is our Factory/Die Stadt ist unsere Fabrik (Spector Books, 2010) and recent exhibitions include ‘Bostanorama’ (2015), Selekta Studio 1, Hamburg, and ‘Sleeping Producers’ (2014), Charim Galerie Wien, Vienna. www.christophschaefer.net

PARADE – ANOTHER PLANNING IS POSSIBLE 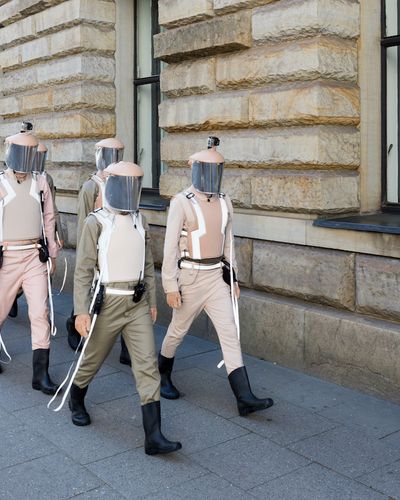