The project examined the modalities of “orchestra-making” among various communities across Hong Kong. It draws on Samson Young’s interest in the historical archetypes of kaifong (Cantonese for people living in a particular neighbourhood) orchestras and the politics of the contemporary music notation system.

To this end, Young—in collaboration with Qinyi Lim and Giorgio Biancorosso—engaged and consulted experts such as Him Lo (curator, Blue House) and Dr. Gordon Mathews (Department of Anthropology, The Chinese University of Hong Kong) to carry out case studies such as the Blue House and Chungking Mansions.

The research has found its way into an exhibition, comprising a film, an artist publication and a research area, at Connecting Spaces Hong Kong–Zurich, in collaboration with the independent art space Para Site, Hong Kong.

The film documents various orchestra performances— by amateur and professional musicians—conducted by Young. The performances and the resulting film explore how differences are temporarily suspended or surrendered in favour of harmony. Young also experiments with conventional orchestra arrangements and music notation, both steeped in Western traditions, to create a platform that attempts to reform the hierarchy prevailing among musicians and to (re)interpret notation.

Giorgio Biancorosso is Associate Professor in Music, School of Humanities, The University of Hong Kong. He is the author, most recently, of Situated Listening: The Sound of Absorption in Classical Cinema (Oxford University Press, 2016). He received a Ph.D. in Musicology at Princeton and was a Mellon Fellow at the Society of Fellows, Columbia University, for three years. His work on the history and theory of listening practices reflects a long-standing interest in musical aesthetics, film music, and the history of global cinema. Biancorosso is also active in Hong Kong as a programmer and curator.

Cosmin Costinas is the executive director and curator at Para Site, Hong Kong, since 2011. He previously served as curator at BAK, basis voor actuele kunst in Utrecht, the Netherlands from 2009-2011 where he curated ‘In the Middle of Things’ (2011), a solo exhibition by Moscow-based artist Olga Chernysheva and ‘I, the Undersigned’ (2010) by Lebanese theatre director, playwright, actor and artist Rabih Mroué which toured Iniva (Institute of International Visual Arts), London, among other places. In 2013 he co-curated ‘A Journal of the Plague Year. Fear, Ghosts Rebels. SARS, Leslie and the Hong Kong Story’, exploring Hong Kong’s complex political, social, pop cultural and epidemiological history through the work of 27 artists. He was co-curator of the First Ural Industrial Biennial (2010) with Ekaterina Degot and David Riff and one of the editors of the ‘Documenta 12 magazines’. Most recently he was on the curatorial team of the 10th Shanghai Biennale (2014) led by Anselm Franke.

Qinyi Lim is a writer and a curator at Para Site since 2012. Previously, she has held curatorial positions at the National University of Singapore Museum and the Singapore Art Museum. Her research is focused on a plurality of vocabularies conditioned by exigent circumstances, drawing from fields of anthropology, history and sociology, not dwelling on the sanctity of the object but rather what the cracks in the sanctity or historicization mean. She holds a MA in Southeast Asian Studies from the National University of Singapore and a BA in Art History from the University of Queensland, Australia. Past exhibitions and projects include ‘Eros’ (2014) with Sumesh Sharma/Clark House Initiative, Bombay, ‘Para Site; Present/Future’ (2013) Artissima 20, Turin, ‘And The Difference is. . .’ (2008) Gertrude Contemporary, Melbourne, ‘Telah Terbit: Out Now’ (2006), Singapore Art Museum, Singapore, ‘Why Stay If You Can Go?’, Stedelijk Museum (2011), Amsterdam, and ‘Three Artists Walk Into A Bar . . .’ (2012), de Appel, Amsterdam. She is currently working on the exhibition ‘A Luxury We Cannot Afford in Singapore’ (expected in September 2015) at Para Site.

Founded in early 1996 as an artist run space, Para Site was Hong Kong’s first institution of contemporary art and a crucial self-organised structure within the city’s civil society, during the uncertain period preceding its handover to Mainland China. It was founded by Patrick Lee, Leung Chi-wo, Phoebe Man Ching-ying, Sara Wong Chi-hang, Leung Mee-ping, and Tsang Tak-ping. It produces exhibitions, publications and discursive projects aimed at forging a critical understanding of local and international phenomena in art and society. Over the years, Para Site has evolved into a professional contemporary art centre, engaged in a wide array of activities and collaborations with other art institutions, museums, biennials and academic structures in Hong Kong and the international landscape. Throughout its history, Para Site's activities have included a range of different formats, such as P/S magazine (1997-2006), a bilingual publication, which was Hong Kong's first visual arts magazine and a central platform for the development of art writing in the city and the Curatorial Training Programme (2007-2010). Since 2012, Para Site has been running an International Art Residency Programme. www.para-site.org.hk

Samson Young is a sound artist and composer who studied music, philosophy and gender studies at the University of Sydney, and holds a Ph.D. in Music Composition from Princeton. Young received an Honorary Mention in Sound Art at Prix Ars Electronica 2012, and in 2013 was named Artist of the Year in Media Arts by the Hong Kong Arts Development Council. He participated in the Asia Triennial Manchester, the Moscow Biennale of Young Art, and also at group exhibitions at Kunsthalle Winterthur, Switzerland, Today Art Museum, Beijing, and Taipei Contemporary Art Museum, Taiwan. Recent projects include Liquid Borders (2012-2014) and Pastoral Music (But It Is Entirely Hollow, 2014-onging). Liquid Borders is an archive of sounds that form the audio divide separating Hong Kong and the Mainland, comprised mainly of recording of vibrating fence wires. In Pastoral Hollow, Young combines his research into Hong Kong’s involvement in the Second World War and artists’ roles in warfare, into sets of military strategies described through musical notation. www.thismusicisfalse.com 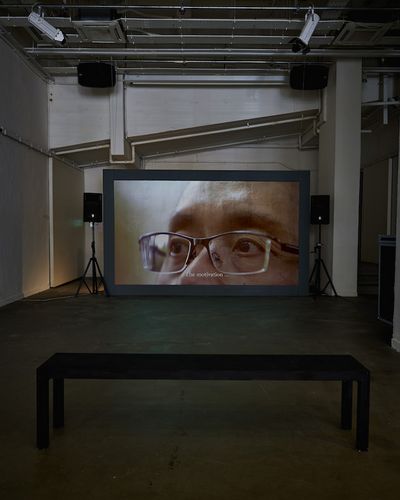 This publication is a compilation of research and ideas based on Samson Young’s past projects and on-going conversations exploring the modalities of “orchestra-making”, power structures within the orchestra, and the politics of contemporary music notation system. The book includes texts and documentation of Orchestrations, an exhibition conceived in 2016 that looks at the formation of community orchestras in Hong Kong; the function of the orchestra and music in negotiating everyday power dynamics; and the structures that govern how musicians perform and how an audience experiences music. The publication also includes texts and documentation of Muted Situation #22: Muted Tchaikovsky’s 5th (2018), part of the artist’s on-going Muted Situations series since 2014, which extends the themes explored in Orchestrations through exposing unheard and marginalised auditory layers within an orchestral performance and reimagines the sonic hierarchies within an orchestra.