The artist collective Teatro Ojo made various media interventions: in TV UNAM, the public television channel of the Universidad Nacional Autónoma de México, and in online platforms such as YouTube. The interventions consisted of montages of images that had been in circulation in Mexico. Forty-one clips, containing a wide variety of public information, were produced as montages to question normative representations of events and facts that, after so many repetitions and manipulations in the media, had become invisible.

The project explores how to make images public without falling for their violence and sensationalism. Teatro Ojo works with images in order, as filmmaker Harun Farocki once proposed, to try to open viewers' eyes to violence and the relations that produce the violence entangled with the images.

The aim is to re-enter the public sphere, to detain the image, to hold it or to question it, and to perhaps establish new relations with the viewer. While there are neither simple or other solutions to the current state of affairs, these interruptions will appear as lightning bolts, ephemerally highlighting some gaps and imagining ways in which the image can intervene in and invoke the public sphere.

For more information about the project, please see:
http://teatroojo.mx/draft (in Spanish)
http://www.re-visiones.net/index.php/RE-VISIONES/article/view/90/222 (in English)

Héctor Bourges Valles is a member of Teatro Ojo since 2002. He coordinated an experimental academic project at the San Luis Potosí Arts Centre (CASLP) called the ‘Theatre and Social Imagination Laboratory’ in 2012. He is a member of the National Autonomous University of Mexico (UNAM) Theatre Management Advisory Board and the CASLP’s Performing Arts Area. He has a degree in political science from the Ibero-American University and a postgraduate degree in documentary cinema from the Autonomous University of Barcelona. He has worked with stage directors such as Héctor Azar and Juan José Gurrola. And as a teacher, he has worked at different institutions including the National University of Colombia, Bogoto, Museo Reina Sofia, Madrid and AlhóndigaBilbao among others.

Helena Chávez Mac Gregor is a researcher at the Research Institute of Aesthetics and lecturer of Art History at the National Autonomous University of Mexico (UNAM) in Mexico City. She holds a Ph.D. in Philosophy from UNAM with a thesis on the relation between politics and aesthetics. She has been Academic Curator at University Museum of Contemporary Art, MUAC (2009-2013), where she developed the program in Critical Theory, Campus Expandido. She curated the exhibition ‘Critical Fetishes: Residues of General Economy’ at CA2M, Madrid (2010) and Museo de la Ciudad, Mexico City (2011) with The Red Specter, a Mexico City-based collective comprising Mariana Botey, Helena Chávez Mac Gregor and Cuauhtémoc Medina. The collective explores the intersection between artistic and theoretical practices from a political, post-colonial and poetic perspective. She also recently curated ‘Color Theory’ (2014-2015) at MUAC with Cuauhtémoc Medina and Alejandra Labastida. Her most recent essays include Occupying the Space, The Battle for Politics; Necropolítica, la política como trabajo de muerte; Políticas de la aparición: estética y política and The Revolution Will Not be Televised.

Laura Furlan Magaril is a member of Teatro Ojo since 2004. She studied performing arts at the Casa del Teatro AC, and later, at the Diplomado Teatro del Cuerpo under the direction Jorge Vargas. She holds a Bachelor’s in Mathematics from the Sciences Faculty, National Autonomous University of Mexico (UNAM). She has worked as an actress and assistant director with theatre artists: Rolph Abderhalden, Ricardo Diaz, Zbigniew Zsumsky, and Jean-Frédéric Chevallier. She is in charge of different educational activities for the philosophy of science seminars at the Faculty of Science, UNAM, since 2003. She has conducted several youth-oriented theatre workshops at the Casa Ernesto Meneses project by The Ibero-American University. Currently she is coordinator for the arts department at Colegio Madrid in Mexico City.

Cuauhtémoc Medina is an art critic, curator and historian with a Ph.D. in History and Theory of Art from the University of Essex. He is currently Chief Curator of MUAC, University Contemporary Art Museum, in Mexico City. He was the first Associate Curator of Art Latin American Collections at the Tate Modern, London (2002-2008). He curated the Manifesta 9 Biennial (2012) in Genk, Belgium, with Katerina Gregos and Dawn Ades. He collaborated on Francis Alÿs’s ‘When Faith Moves Mountains’ (2002). Exhibitions include ‘20 Million Mexicans Can´t Be Wrong’ (2002), London, ‘Francis Alÿs. Diez cuadras alrededor del estudio’ (2006), Mexico City and Teresa Margolles’ project ‘What Else Can We Speak About’ (2009) for the 53rd Venice Biennale’s Mexican Pavilion. He co-curated ‘The Age of Discrepancies, Art and Visual Culture in Mexico 1968-1997’, (2007-2008) in Mexico City. Publications include South, South, South, South. 7th International Symposium of Contemporary Art Theory México (Patronato de Arte Contemporáneo, Mexico City, 2010) and “Entries” (in collaboration with Francis Alÿs) in Francis Alÿs: A Story of Deception (Tate Publishing, London, 2010). In 2012, Medina became the sixth recipient of the Walter Hopps Award for Curatorial Achievement instituted by the Menil Foundation.

Karla Rodríguez Lira is a member of Teatro Ojo since 2002. She holds a MA in Architecture from the National Autonomous University of Mexico (UNAM), with public space and its social construction as her research focus. Educated in performing arts at the Dramatic Art Centre AC (CADAC), Mexico City, she has worked as a stage designer and producer with several theatre artists such as Juan José Gurrola, Jean-Frèderic Chevallier, Jorge A. Vargas, Mariana García Franco, and Héctor Bourges. She has been teaching at the Architecture School, as well as the Theatre School at UNAM since 2007. Currently she coordinates many cultural-artistic activities as part of the Faculty of Architecture’s academic program.

Teatro Ojo is an artistic collective founded in 2002 by Héctor Bourges Valles, Karla Rodríguez Lira, Laura Furlan Magaril and Patricio Villarreal Ávila. Their work addresses the power of the gaze as a site for the production of the visible. The gaze as a bridge allowing perception of invisible relations and behaviours within the public, private, intimate and unconscious spaces we live in. In their site specific artworks, performances and urban interventions they dwell on and question memory, city, violence, community, modernity, education, pre-language, or the post-human. At the 2011 Prague Quadrennial, they were awarded Best Work in Theatre Architecture and Performance Space for Within a Failing State, which brought together works done by the collective from 2007 to 2010. They participated in the first BiennaleOnline (2013) curated by Jan Hoet. Their work was part of the exhibition ‘Playgrounds’ (2014), Museo Reina Sofía, Madrid, and ‘El Contrato’ (‘The Contract’ 2014-2015), AlhóndigaBilbao. They have also performed and exhibited their work in Spain, Greece, Czech Republic, Serbia, Switzerland, Colombia, Argentina, and India. www.teatroojo.mx

Patricio Villarreal Ávila is an artist working in performing arts and theatre; he has been a member of Teatro Ojo since 2005. He graduated from Casa del Teatro AC, Mexico City and the Latin American and Caribbean International Theatre School (EITALC). He has taught at Centro de las Artes de San Luis Potosi Centenario, University of Hidalgo, and The Ibero-American University, Mexico City and more. He has worked on several publications, and participated in workshops, seminars and art projects with Ileana Dieguez, Victor Varela and Teatro Obstaculo in Cuba, Eleni Tzirtzilaki and Network Nomadic Architecture in Greece and LUPE Arte and the Austin Latino Theater Alliance (ALTA) in USA, among others. In 2009 he studied stage direction in Buenos Aires, Argentina, with artist Emilio García Wehbi. 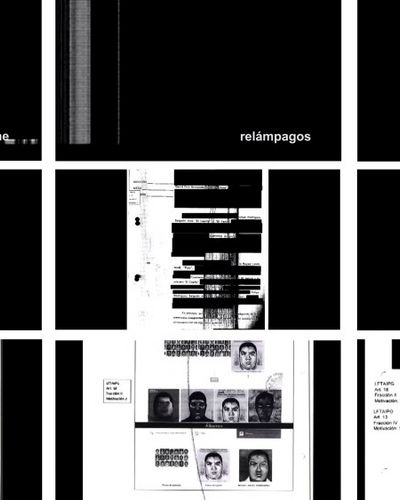 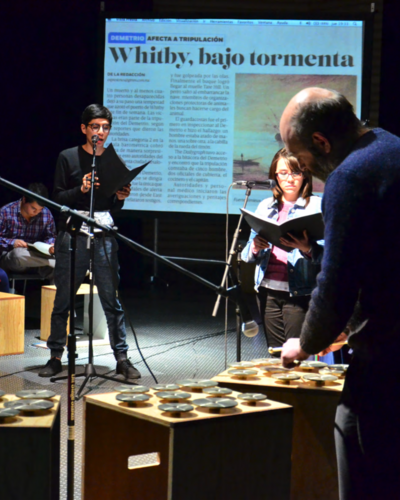 "AND MANY IMAGES CAME UPON ME"

In this project, the Mexican experimental theatre group Teatro Ojo, founded in 2002, addresses the traumatic violent images widely circulated in the social media to explore how this stream silences all constructive thought. The group produced a symposium and short clips for public television and Youtube, aiming to undermine the sensationalism of human tragedy while preserving the public possibilities of images.

Gazing upon the catastrophe with nothing to say in response to it, the local configuration of our public sphere unfolds as if isolated. The normalised circulation of images of violence and their saturation no longer ignite anything, nor are they able to open up anyone's eyes. Far from creating a space to produce collective thought, they are subordinated to the same violence they are seeking to overcome.

At Night, Lightning sought to discover order, direction and meaning by publicly circulating a series of images that continues to tremble, as well as lightning-like montages seeking to establish new relationships through their effects.