In Russia, statecraft is criminalised by aggressive laws and state structures, which routinely mobilise the neo-liberal agenda. In such an epoch of eroded publicness, Chto Delat’s Rosa’s House of Culture seeks to construct counterpublics.

Writing on counterpublics in Rethinking the Public Sphere: A Contribution to the Critique of Actually Existing Democracy, 1990, Nancy Fraser states: “The point is that, in stratified societies, subaltern counterpublics have a dual character. On the one hand, they function as spaces of withdrawal and regroupment; on the other, they function as bases and training grounds for agitational activities directed toward wider publics.”

D.K. Rosy aka Rosa’s House of Culture explores the legacy of the Houses of Culture, a widespread state-funded infrastructure for leisure and education in the former Soviet Union. “How can we reimagine this legacy?” asks the collective.

To realise their research and practice, Chto Delat invited visitors into their space and process. These included marginalised leftist collectives, initiatives involving grassroot unions of IT and educational workers, self-organised feminist theatre groups, the sewing co-operative Shvemy and the School of Engaged Art, an educational project that the collective initiated in 2013.

Coming together in a show of solidarity during dark times, these collectives shape and defend their identities, interests, and needs by engaging in a range of activities. By encouraging dialogue between these groups, Chto Delat seeks new ways of approaching solidarity and engagement, with the aim of understanding the prevailing crisis through critical modes of artistic communication.

Also located at Rosa’s House of Culture is The Zetkin Library, a distinctive collection of books and ephemera related to art and activism.

Dmitry Vilensky: Activist Club or On the Concept of Cultural Houses, Social Centers & Museums. What is the Use of Art?, 2015. Download PDF

Chto Delat (What is to be done?), a collective of artists, critics, philosophers and writers, was founded in 2003 in St. Petersburg, Russia, in order to integrate political theory, art and activism. Their activities are coordinated by a core group including Tsaplya Olga Egorova (artist), Artiom Magun (philosopher), Nikolay Oleynikov (artist), Natalia Pershina/Glucklya (artist), Alexey Penzin (philosopher), David Riff (art critic), Alexander Skidan (poet and critic), Oxana Timofeeva (philosopher), Dmitry Vilensky (artist) and Nina Gasteva (choreographer). Chto Delat sees itself as a self-organised platform for a variety of cultural activities intent on politicising “knowledge production” through redefinitions of an engaged autonomy for cultural practice today. It organises art projects, seminars and public campaigns that can take the form of videos, plays, radio programmes, posters and murals. The collective has been publishing the Russian-English newspaper What Is to be Done? since 2003. Recent group exhibitions include ‘Really Useful Knowledge’ (2014-2015) looking into issues around education at the Reina Sofia Museum, Madrid, and ‘Art Turning Left’ (2013-2014) at Tate Liverpool, United Kingdom. www.chtodelat.org

Tsaplya Olga Egorova is an artist and filmmaker, and co-founder of the Chto Delat collective. Working across formal boundaries her work includes sound, lecture performances, radio plays and theatre performances and songspiels. She was a founder of the feminist group Factory of Found Clothes and participated in many performances and exhibitions with the group. As part of Chto Delat her exhibitions include: ‘Chto Delat? in Baden-Baden’ (2011), Staatliche Kuntsthalle, Baden-Baden, ‘Chto Delat? Perestroika: Twenty Years After: 2011–1991’ (2011), Kölnischer Kunstverein, Cologne, ‘Ostalgia’ (2011), New Museum, New York, ‘Study, Study and Act Again’ (2011), Moderna Galerija, Ljubljana, and ‘The Urgent Need to Struggle’ (2010), Institute of Contemporary Art, London.

Nikolay Oleynikov is an artist, activist, member of Chto Delat based in Moscow. He is co-editor of the newspaper Chto Delat?, a member of the editorial board of the Moscow Art Magazine, co-founder of the Learning Film Group and May Congress of Creative Workers. He is also a member of the Arkady Kots band. Since 2013, he has been a tutor at School of Rose, a project initiated by the Chto Delat under the aegis of their pedagogical project School for Engaged Art. He is known for his murals and graphic works within the tradition of the Soviet monumental school, comics, surrealist-like imaginary and punk culture. Oleynikov is author of the book SEX of the OPPRESSED (Moscow, 2013-14).

Dmitry Vilensky is an artist and educator. He works mostly with collective practices and focuses on developing large-scale architecture constructions, educational seminars, plays, graphic work, and films. Не is a founding member of Chto Delat. Vilensky is also co-editor of the Chto Delat? a bilingual newspaper in Russian and English published by the collective and main facilitator of the School of Engaged Art, a pedagogical project initiated by the collective, in St. Petersburg. He has participated with Chto Delat in their recent exhibitions and performances including the Sao Paulo Biennale (2014), the Summer Festival at Kampnagel, Hamburg (2013), and ‘FORMER WEST: Documents, Constellations, Prospects’ at Haus der Kulturen der Welt (2013), Berlin and the 10th Gwangju Biennale (2012). 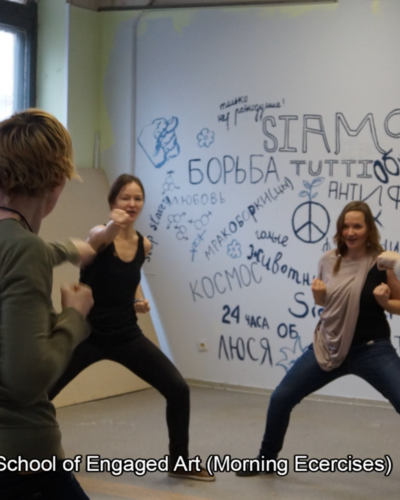 STATEMENT REGARDING CHANGE OF LEASE

Since 2003, the collective Chto Delat has been publishing an eponymous newspaper two to five times a year. Each newspaper addresses a theme or problem related to the collective's current artistic production. This take-away publication is distributed for free at congresses or exhibitions, social forums and rallies, where it reaches and forms different constituencies. The newspaper is sometimes used as a form of intervention in concrete situations dictated by the urgencies of protests, intellectual provocations or comments.

This was the case with the issue Houses of Culture – Yesterday, today and tomorrow (first published in 2016 and reprinted in the framework of Draft). For the Chto Delat collective, the question of closely reviewing how best to establish and develop houses of culture is not an abstract question for scholarly research. To ask why houses of culture are important today expresses the urgent need to create a fundamentally new context for developing art. Chto Delat believes that houses of culture can become places for forming a new public beyond the limits of the neoliberal creative class. It also considers such houses to be focal points for developing political communities prepared to produce and defend the socialist foundations of culture and art.